When betaworks and a team from the New York Times put out the News.me iPad app last year, it was a forward-thinking experiment on using your Twitter network to filter the news. It was a little bit too forward thinking, as it turns out, with its multiple views of what people in your social network were reading. But the News.me team learned from it and redesigned the entire experience from the ground up for the iPhone app, which just went live today in the iTunes store. 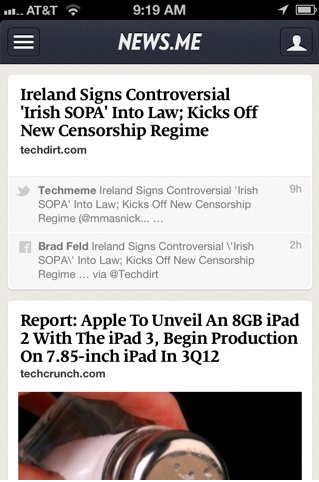 While the News.me iPad app never really took off, its daily news email became a quiet hit. It is a once-a-day summary of the top news your friends are reading on Twitter. The engagement rates on the email product were through the roof, so the team took that as its new starting point. “After seeing the reaction to that,” says News.me general manager Jake Levine, “it became clear to us there is this overwhelming need for a social discovery experience built for news.”

Unlike the iPad app, which never rolled up all of your social news into one feed, the iPhone app does exactly that. (Instead, you had to click on each of the people you follow on Twitter one at a time to see their social news view). The News.me iPhone app presents you with a single, unified stream of the top news stories across your social networks. You can log in with Twitter and now with Facebook too, and then it shows you not only what the people you follow are sharing, but what they are seeing and reading in their feeds.

The entire app is designed to be used with one hand.When you click on a headline, you can often read the full story in the app (otherwise it opens up a browser within the app), save it to your reading list for later, and share it via Twitter, Facebook, or email. You can also comment on the article within the News.me app, or just leave a quick reaction (Ha!, Wow, Awesome, Sad, Really?).

I’ve been using the iPhone app for a couple of weeks, and I find myself wanting to tweak the algorithm, or exclude certain sources . But for the most part, it provides a steady stream of top news across my social networks, pre-filtered and ready to read.

Levine is right that there is too much noise out there and News.me is tackling the very hard problem of how to filter the news shared across your social networks. Its first pass is simply to pull out the headlines from the links and show that first, but then it looks for other signals such as how many times a story is shared or retweeted.

Filtering the news in a way that seems natural to different readers is extremely complex. News.me does this filtering job better than most apps using a combination of social signals and algorithms (remember, betaworks also owns bit.ly, so it knows what links people are sharing across the Web). But the key is that it boils this down into a simple interface.

With News.me, the news is only as good as your network. Just one more reason to follow people who share the news you care about.