With Path raising north of $30 million yesterday at a reported $250 million valuation, it’s natural that everyone is comparing it to Instagram, which sold just last week for $1 billion to Facebook.

After all, on the surface the two mobile apps start from a similar place: both are primarily used to share photos with friends and followers, both use filters to make crappy phone pics look better, both are mobile-first apps, and both are highly social apps.

It’s easy to compare. In fact, when the Instagram deal was announced, I wondered out loud what it would mean for Path’s valuation:

Also, if Instagram is worth $1B, how much is Path now worth?

But as Om Malik detailed in a post yesterday titled “Why Path is no Instagram,” the two services are far from interchangeable. “I find the comparisons with Instagram unfounded and premature,” he writes.

The truth is that Path is not trying to be like Instagram. It is taking its own path, one which may end up being more difficult. But if it makes it through to the other side, it could end up becoming even more valuable than Instagram. Path’s ambition is not to become a killer mobile app. Its ambition is to become a killer mobile social network. It’s a much broader ambition than Instagram’s and much harder to pull off. 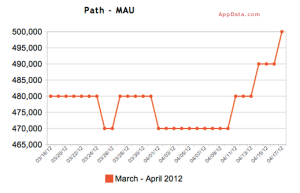 Right now, Path only has about one tenth the number of registered users that Instagram does (3 million versus 30 million), and an even smaller fraction of active users. AppData, for instance, estimates Path’s monthly active users at 500,000, compared to 12.6 million for Instagram. (Remember, these are outside estimates, and thus, are surely wrong, but hopefully they are wrong by the same degree for both services and thus give us a sense of the relative popularity of each one. Also, note how all the publicity in the past few days has boosted Path’s numbers).

Not only does Path have much fewer users than Instagram, but its semi-private nature (you are limited to 150 friends) is holding back its reach. I am not as convinced as Om, however, that this is such a bad thing.

When you take a deeper look at Path, it is very different from Instagram. Yes, it uses mobile photo-sharing as its starting point, but there is so much more you can share with your friends, including your thoughts, your location, who else you are with, the songs you are listening to, video clips, and even when you are going to sleep (never used that one). Instagram does one thing incredibly well: mobile-photo sharing. Path is broader and yet more intimate at the same time. It is about sharing your life, but only with those people who are closest to you.

Today, Path is a drop-dead gorgeous mobile app, especially in its current incarnation (Path 2.0). Just like with any social app, it is only as good as the people in your network who are also using the app. And while Path is making progress, the way it is designed actually works against rapid, viral growth.

As I’ve argued in the past, the quasi-private nature of Path is its Achilles Heel. I personally still struggle with the empty-room problem whenever I open the app. The only people I see in there are VCs and bloggers, not my actual close friends.

Om has a similar issue:

. . . the app at present lacks the draw or the engagement I normally experience on Instagram and other apps. I have found that it does so much that I sometimes forget to open the app, even though I intend to. Path still needs to define a singular addictive behavior and that is its challenge (and opportunity.)

If it wasn’t for the empty-room problem, I would be addicted to Path. But it’s too early in Path’s trajectory to determine where it will land. At least anecdotally, I am noticing the room is filling up, or at least more people are wandering in.

Path used to be completely private, but one of the smartest changes it made was to allow you to selectively share posts with your broader social networks across Facebook, Twitter, Tumblr, and Foursquare. That draws other people into Path and reminds inactive users to go back and check it out (“Hey, something is happening there!”).

However, keeping the network somewhat closed is still the key to making Path distinct from other social networks. The semi-private nature of the network is intended to make people comfortable sharing things they would never share on Twitter or Facebook. If Path is designed properly, people will share things there that they won’t anywhere else. (I haven’t seen too much evidence of this myself, but most of the people I know on Path are over-sharers anyway).

Path’s growth is slower than Instagram’s because it is more restricted by design. Path demands more of its users. You can’t follow someone unless they follow you back. It’s less for lurkers than it is for active sharers. You can’t just be a lurker because there aren’t enough people in your network to make lurking addictive.

You have to actively post and share to your network. It only becomes addictive when you get positive reinforcement, when your friends comment on or like whatever you are sharing—and perhaps share something back in response. Those are the magical moments Path needs to capture.

Until there is a critical mass of your friends posting in the app, there isn’t much reason to open it up. But once it reaches that critical mass, it might become very addictive indeed. And as long as Path keeps growing at a decent pace (albeit its own pace), it will keep moving closer to that tipping point. Can it get there? That is the $250 million bet investors just placed on Path.